This extraordinary book contains eyewitness accounts of life in Cambodia during Pol Pot’s genocidal Khmer Rouge regime from 1975 to 1979, accounts written by survivors who were children at the time. The book has been put together by Dith Pran, whose own experiences in Cambodia were so graphically portrayed in the film The Killing Fields.

The testimonies related here bear poignant witness to the slaughter the Khmer Rouge inflicted on the Cambodian people. The contributors — most of them now in the United States and pictured in photographs that accompany their stories — report on life in Democratic Kampuchea as seen through children’s eyes. They speak of their bewilderment and pain as Khmer Rouge cadres tore their families apart, subjected them to harsh brainwashing, drove them from their homes to work in forced-labor camps, and executed captives in front of them. Their stories tell of suffering and the loss of innocence, the struggle to survive against all odds, and the ultimate triumph of the human spirit. 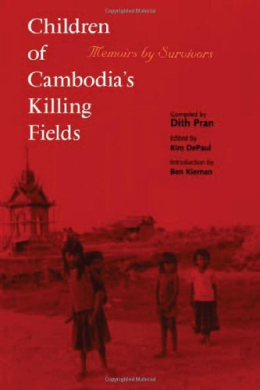