“They say those who forget history…are doomed to repeat it.”
Why are there continued practices of systematic genocide in the 21st century today? One commentator explains that for starters, there are past genocides of the 20th century that have gone unnoticed and unrecognized, therefore complexing strategies for the prevention of genocide and dooming us as humans to make the same mistakes. “Screamers” is a 2006 “rock-umentary” that explores the root of modern genocides, from Saddam Hussein’s campaign to Darfur. In the film, members of a rock band called System of a Down, who are of Armenian descent themselves, collaborate with filmmaker Carla Garapedian to raise awareness about the Armenian Holocaust in 1915, and its lack of recognition by some parties and states to this day. 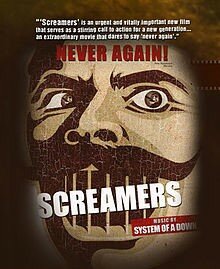