We Wish to Inform You That Tomorrow We Will be Killed With Our Families: Stories from Rwanda

Winner of the National Book Critics Circle Award for Nonfiction.

In April 1994, the Rwandan government called upon everyone in the Hutu majority to kill each member of the Tutsi minority, and over the next three months 800,000 Tutsis perished in the most unambiguous case of genocide since Hitler’s war against the Jews. Philip Gourevitch’s haunting work is an anatomy of the war in Rwanda, a vivid history of the tragedy’s background, and an unforgettable account of its aftermath. One of the most acclaimed books of the year, this account will endure as a chilling document of our time. 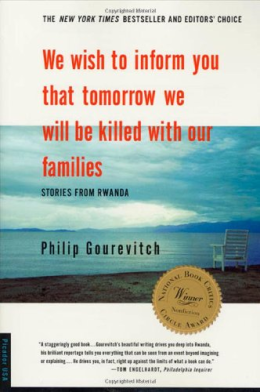